“Most mainstream music nowadays seems to get flak for being ‘manufactured’ and ‘standardised’. You won’t get that with me.“ 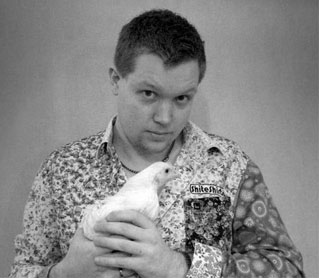 Joe Perkins is a diversely-talented solo musician based in Bristol with a burning passion for all aspects of the creative process. He released his debut album, A Host Of Other Artists, on 11th February 2013 with lead single Flying High preceding on 4th February 2013. Both are now available as entirely-free downloads here.

Born in 1989, Perkins studied classical piano from an early age and quickly began to recognise his love for making music. However, it was only after swapping the ivories for six strings circa 2002 that his full potential was realised. Taking the transition in his stride and quickly finding his fingers on the electric guitar, he went from strength to strength and within 18 months was performing classic rock songs in school shows to great recognition.

Teenage life was spent developing guitar style and technique by studying the masters – Vai, Satriani, et al – and this lead quickly to recording his instrumental compositions and reciting them in the live environment. Taking lessons from two teachers simultaneously as well as practicing at home for many hours a day, music wasn’t just a hobby – it was, and continues to be, Joe’s biggest life passion.

Recognising the need to develop songwriting and production skills, Perkins relocated to the Isle of Wight in 2009 to enrol at the acclaimed Platform One College of Music. In a venture lasting three years and yielding a First-class BA (Hons) degree in Commercial Music, this period also saw Perkins perform at the Isle of Wight Festival and Bestival, as well as a string of dates over in Holland and weekly gigs with various local bands all around the island.

Most importantly however, it was on the Isle that Perkins spent most of his time booking out recording studios, building up his knowledge of sound engineering and writing the songs that later would become A Host Of Other Artists. With a distinctly old-school approach to recording, valve amplifiers, microphones and analogue hardware was always favoured over modern plug-ins and simulators. The resulting album is therefore raw, organic and honest – untainted by record label influence and free from big-budget over-production.

“I just made it with my mates, and we had such fun doing it – which is the way I think music should be made. There are mistakes, comedy moments and a significant ‘cheese’ factor, but if I liked the sound of something then it stayed in. There were no higher powers telling me to produce a hit single, master it louder or – worse still – take out the bagpipes!“